Sporopollen is an outdoor performance art show by Oceanallover that John and I attended last weekend as part of Dumfries & Galloway Art Festival. Blending sound, physical theatre and the environment, the show took a form of an interactive carnivalesque procession along the banks of the River Nith near Robert Burns Centre.

The show is devoted to the cross-pollination and cross-contamination of ideas in culture. Its title alludes to the duality of life/survival propagated by pollen and death/disease spreadable by spores, growth and decay.

We were given wifi earphones to listen to three soundtracks that were created to accompany the performance, but there was some live music played by an itinerant musician dressed in a bizarre long beaked mask in a long dark cloak reminiscent of the Venetian Medico della peste carnival character.

The plague doctor costume was originally designed to protect from  airborne contagion but endured in  a cultural memory as memento mori. So from the very outset the cello player figure that led us along Mill Rd to the Old Bridge House embodied in itself a combination of creativity and death but also promised the spectators a sort of a rite of passage with a hint of carnival. 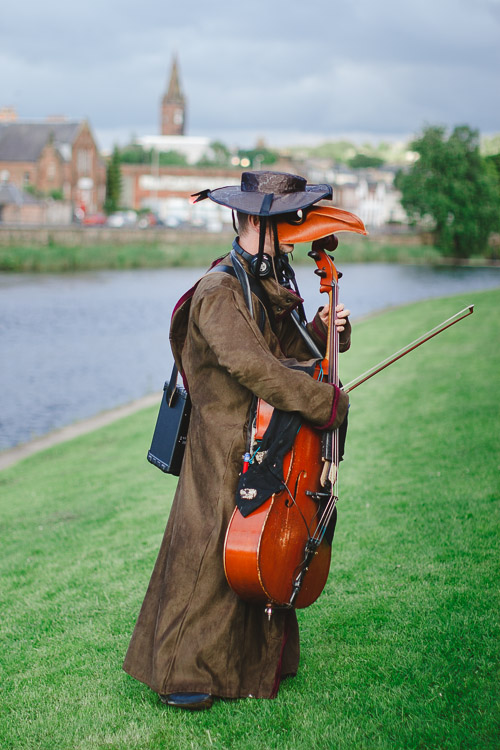 A cello player from the Sporopollen performance show 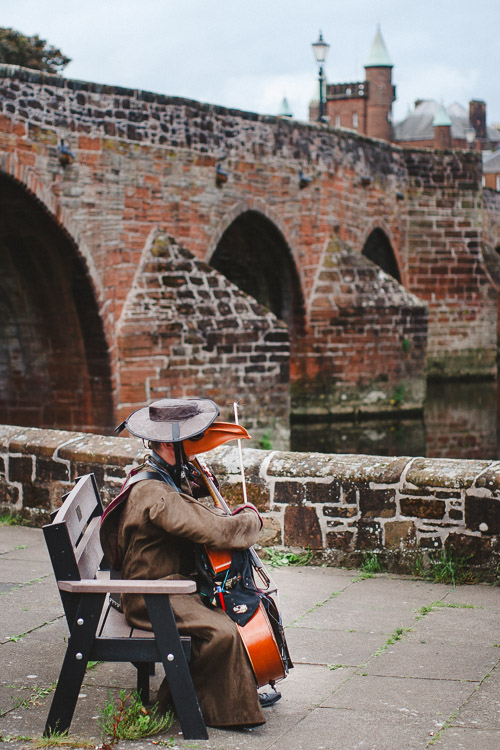 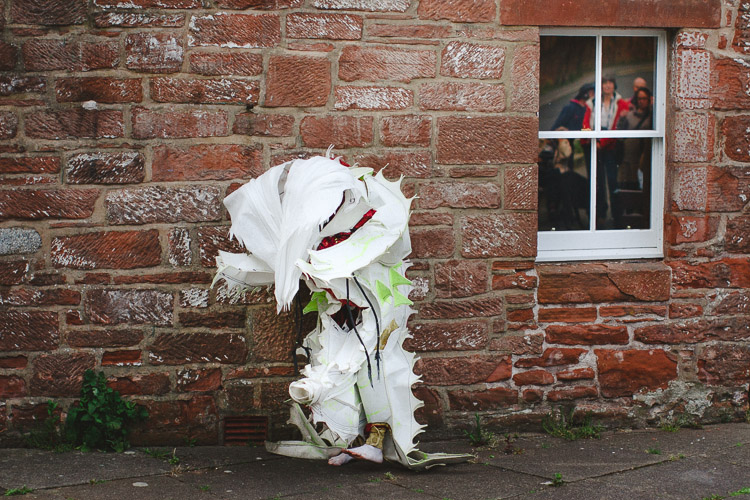 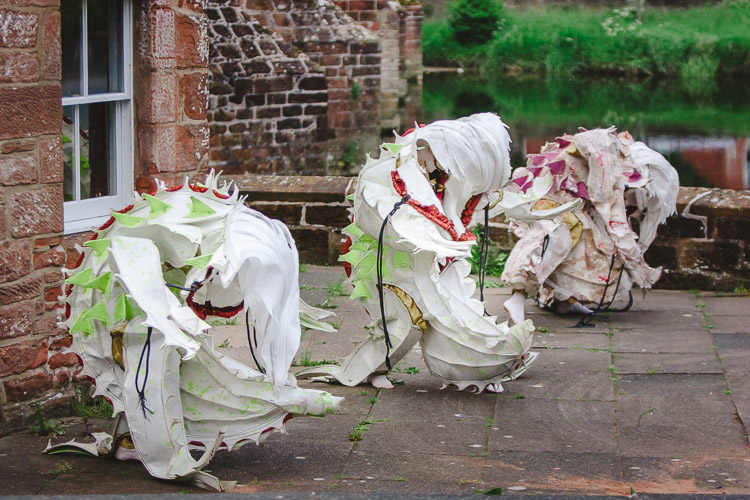 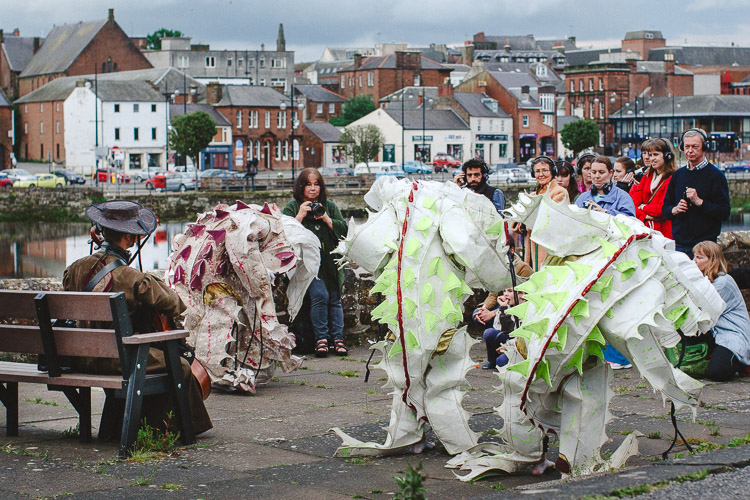 Sporopollen performed on the banks of the River Nith

I liked the spore costumes but thought they were kind of spooky, especially when the performers came up close and personal looking you in the eye and reciting verse. This impression was mitigated by the fluidity with which the actors were constantly getting in and out of their unidentifiable (thus threatening) grotesque shells to reveal a more human and recognisable jester/trickster outfits. 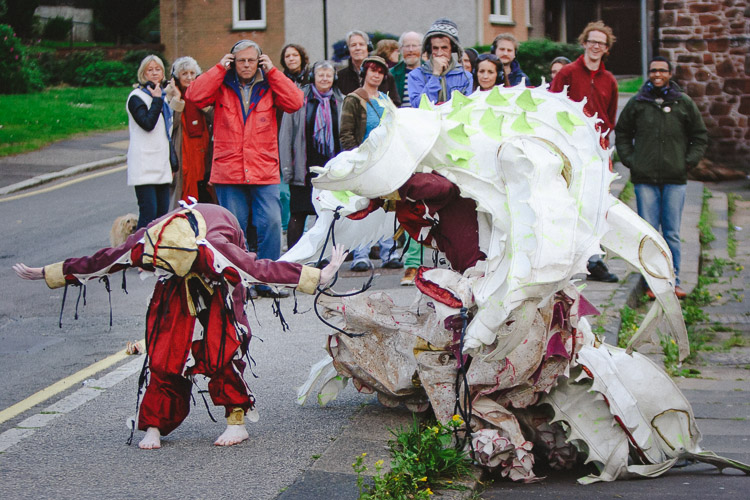 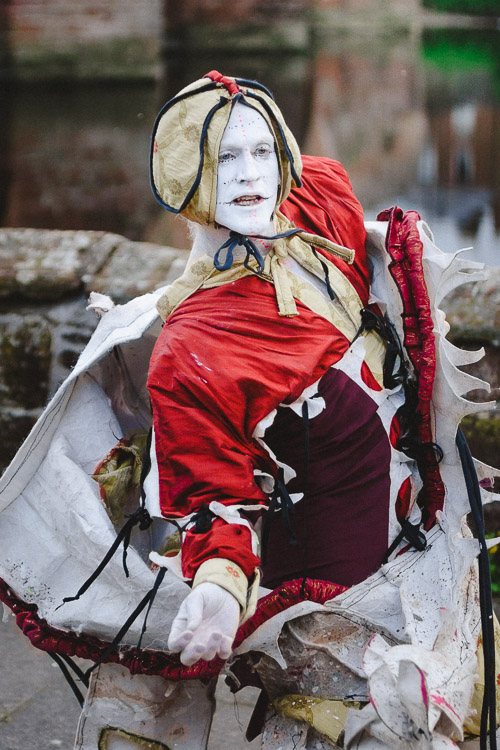 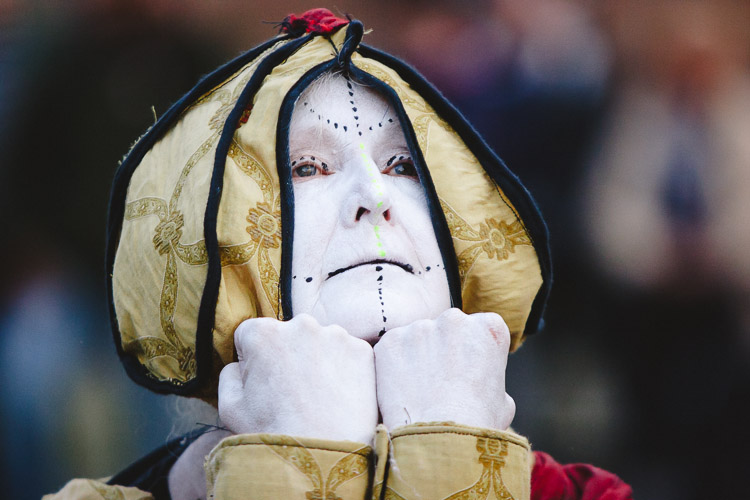 Close up of the white face makeup 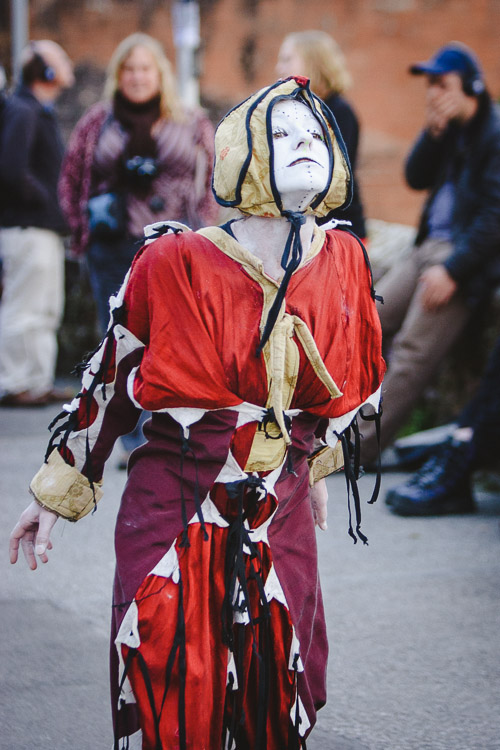 A humanised aspect of a Sporopollen performer 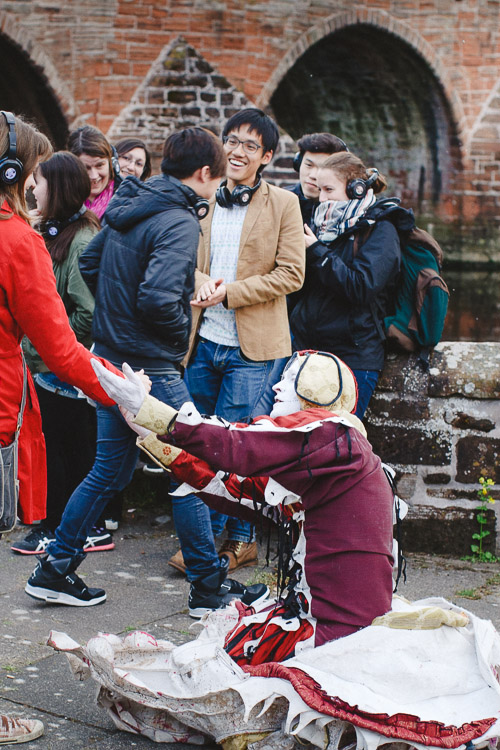 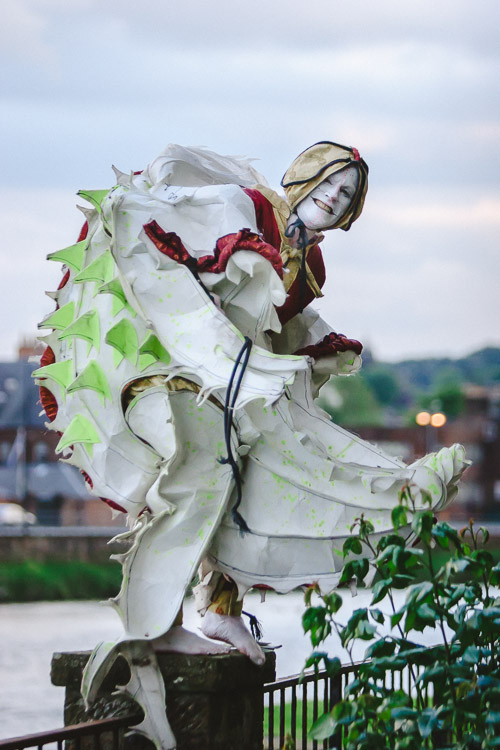 Back in the grotesque shell – interesting but spooky trickster/bio hazard combo! 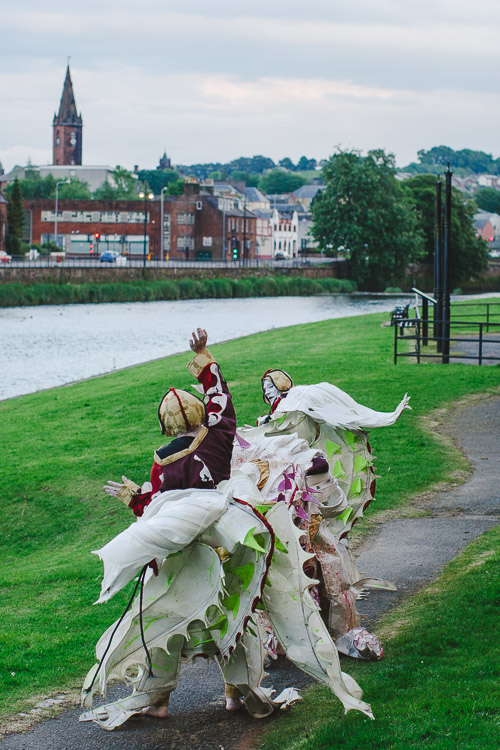 The performance was inscribed into the Nithsdale views 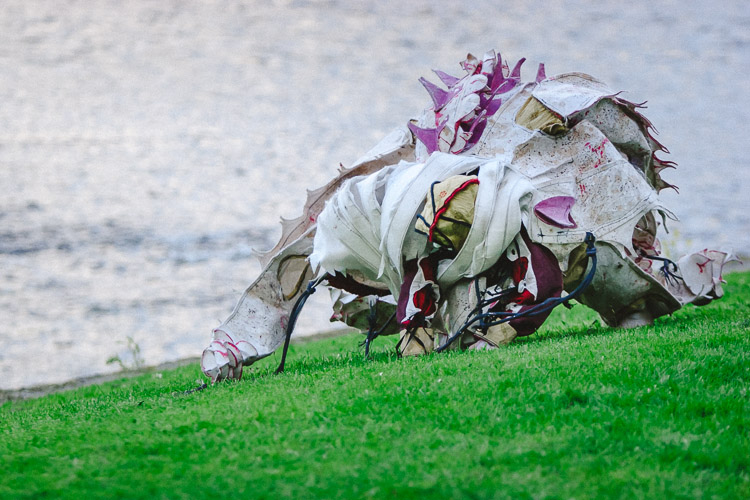 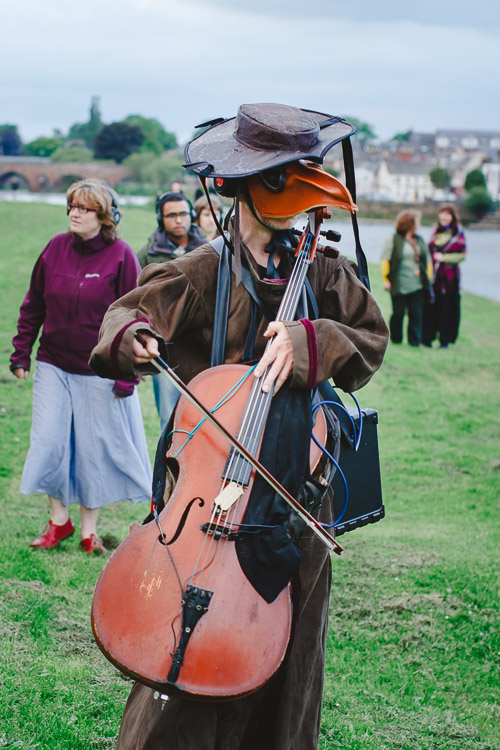 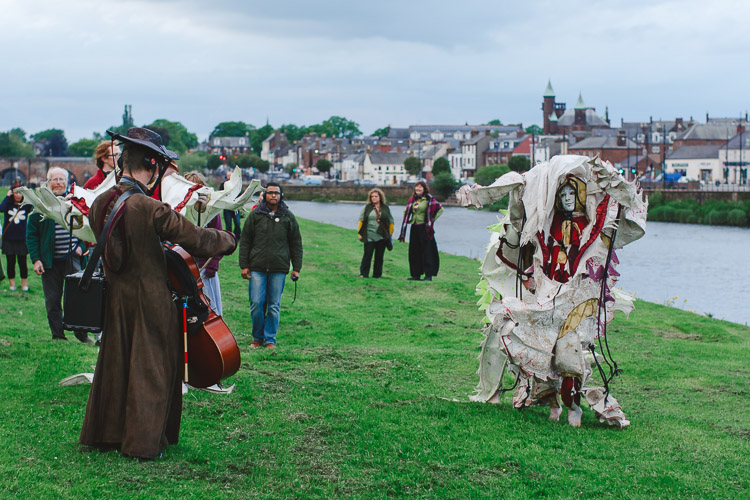 The steady passage  was interrupted by spontaneous physical theatre 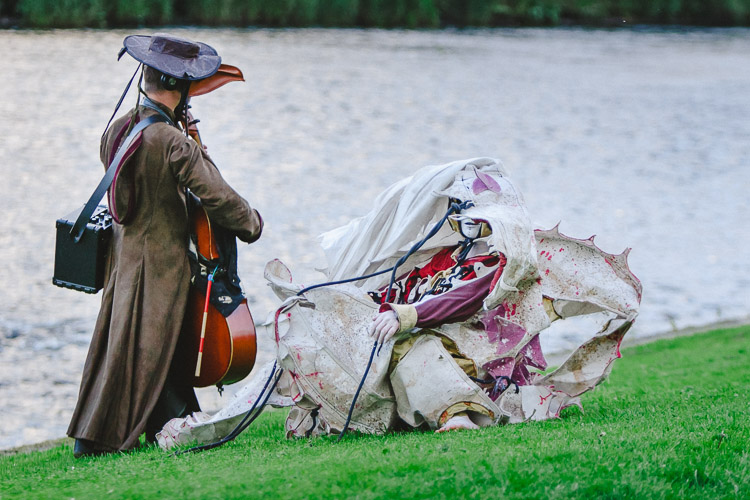 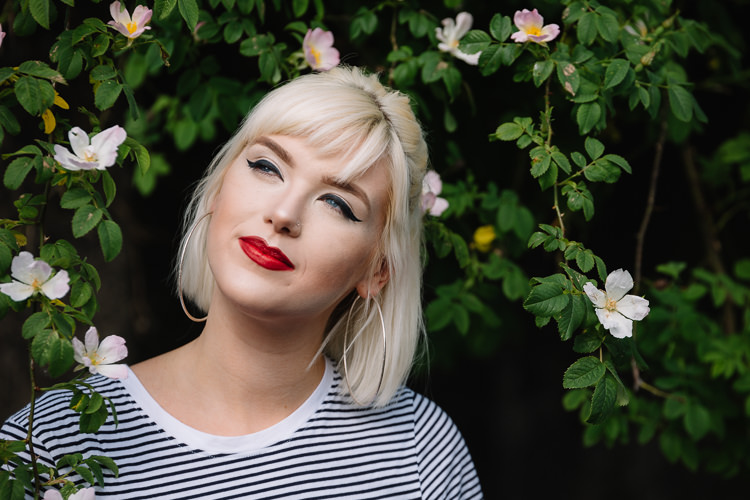 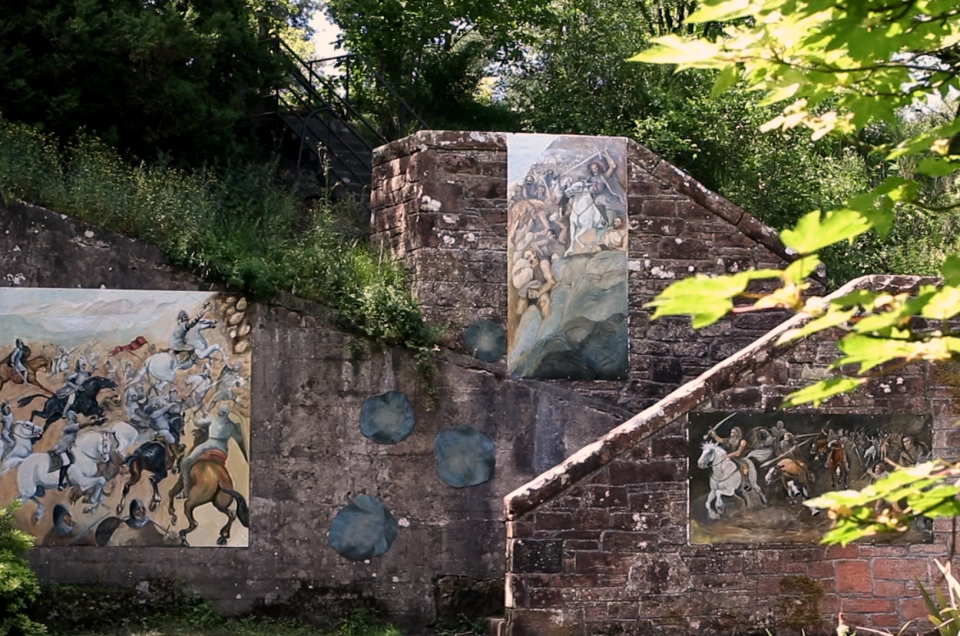